Recently, I've been picking up the occasional issue of Imperium magazine when ever there's something space marine or terrain flavoured on the front. As such, I've built up a small pile of terrain sprus that needed assembling and painting. In one pile I have 5 sprus of Ryza ruins, which I have now assembled and begun painting. Here's the first half completed. I have 3 larger buildings yet to finish. Altogether, these ruins will give me a good 4x4 table of terrain to use in games of 40k and Grimdark Futures. 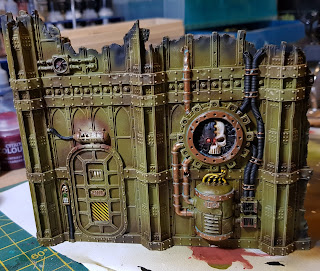 I chose a greenish ochre colour to base them with then set about adding random patches of Snakebite Leather contrast using the airbrush. 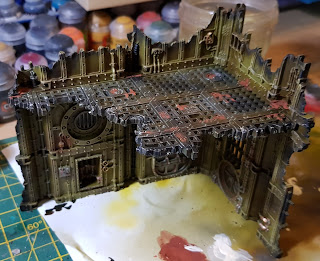 Weathering consisted of applying patina to the brass areas and rust weathering powders to the more metallic areas. I picked out some details such as wires, skulls and screens etc... to break up the colour and add some 'wow' details. I don't think you need to do this with every wire. Just a few here and there helps the terrain pop without it being a burdensome task or visually overwhelming.

I finished by adding some lighting glow and some scorch marks around the edges using the airbrush. Overall, I'm not too happy with the lighting glow but apart from that they have turned out well so far. I think I'll have another go at the lighting once I've painted the remaining buildings.

These ruins will go nicely with the pipes and reactor shown in this picture I think. Taken together I should have quite a nice table of terrain. 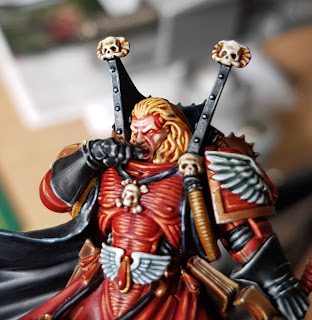 Recently, my graduating cohort of trainee teachers gifted me with a £25 GW voucher. There wasn't anything Ork shaped that I had my eye on so I decided to use it to get Mephiston for £1! Ordinarily, I wouldn't spend such a ridiculous price for a single plastic miniature (£26) but the voucher was basically free money so it seemed a sensible idea. Anyway, Mephiston is an excellent miniature and I had a great time painting him. There are a lot of soft materials present (capes and robes etc...) so I worked hard to develop my skills around wet blending and glazing to get the smooth transitions in the cloth. I agonised over the free hand details on the robes but decided to give it a go in the end. I'm glad I did because I think the model might have been a tad dull otherwise. The glowing eyes also came off better than my previous attempts at glowing effects so that's good too. 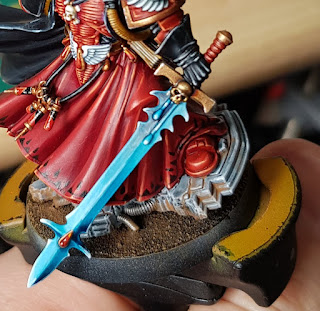 These images are not of the complete model. All that was left to do at this point was add some grass tufts and paint the edge of the base. Onwards and upwards. 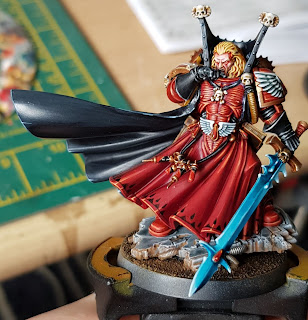 Posted by Musings of a Smurf at 2:17 pm No comments: 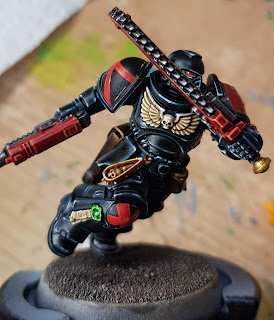 I have been able to pick up another 10 snap-fit Primaris marines from eBay for a reasonable price to bolster the original 5 I had painted. This left me with 5 spare so I decided to build and paint them as death company members. 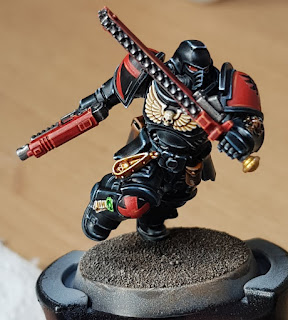 It was a nice painting challenge as I've never been all that confident painting black. I decided to highlight the armour using cool blues and greys as a contrast to the warm reds and oranges of their less deranged brothers. Hopefully, this allows them to stand out a bit from the others, which is something that the death company have always done in Blood Angel armies. 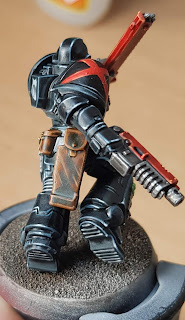 Only one has been completed so far, with another 2 almost complete. I'll paint all 5 backpacks at the end, which is why it is missing. Overall, I'm quite pleased with how this one turned out and I'm looking forward to eventually having a full squad charging around causing mayhem!

Posted by Musings of a Smurf at 7:33 pm No comments: 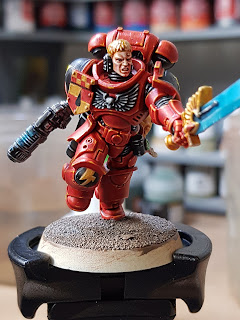 I have recently been keeping half an eye out for useful issues of Imperium magazine, which my local Forbidden Planet store stocks. By 'useful' I am referring to any issues with Primaris Space Marines on the front!

Recently, my son was born and so I came up with the idea of starting a little collection for him that I can build and work on over time. When he's old enough, he'll have his own army that he can begin using right away. My own dad did something similar for me when I was younger when he made me a train set and also helped me with painting my Airfix aircraft models.

Anyway, I love the Blood Angels painting scheme so I've also used this as an excuse to really push myself and learn some new painting techniques. I present to you some examples of a small squad of assault intercessors that have now been completed. 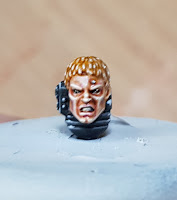 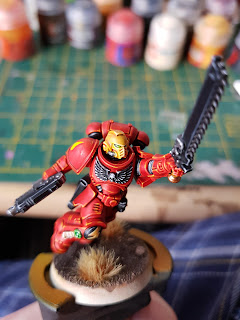 I've been using contrasts, washes and blends to get the smooth transitions of colour on the armour, which is then sharpened with extreme edge highlighting. I really pushed myself on the sword, which was wet blended. This was a really useful technique to learn and I'm really pleased with the results.
I love the clean, uncluttered look of the Primaris marines. I think Space Marines became far too busy with trinkets and details etc... Blood Angels were amongst the worst offenders for this! These new Primaris marines have allowed me to go right back to the original 2nd Edition colour schemes so I have tried to be faithful to these (including the squad markings). The heraldry on the models is a new addition, which is giving me an opportunity to get creative without adding loads of fussy trinkets. 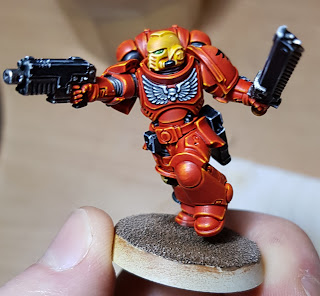 I've completed this squad of five now and have recently moved on to a Lieutenant. Hopefully, he'll be competed soon!
Posted by Musings of a Smurf at 5:32 pm No comments: 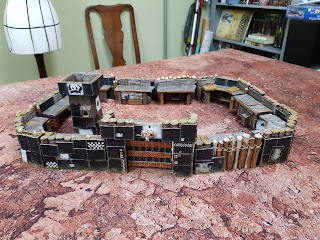 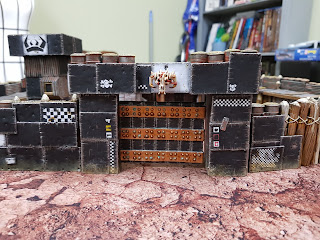 A while ago I backed a Kickstarter campaign run by Fogu Models for their Fort of Hardknox terrain. It immediately inspired me at the time to use it as an Ork fort and made me think about the Boss HQ building in Dawn of War and also the old card Gorkamorka fort. I had to have one so I backed the campaign. Now, several years later, I have finally gotten round to putting together and painting the piece. 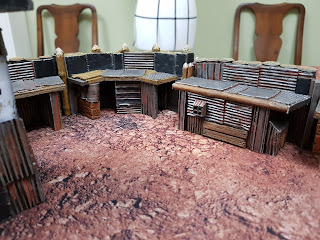 The airbrush has been a major help in painting the large surface area consistently and relatively quickly. I opted for a 'Goff light' scheme to fit with my current Ork army theme. I didn't go overboard on the ork details though (hence the 'light') so that it could still be used as a gang fort in the future should I wish. I also kept the weathering to a minimum to maintain the simple colour scheme. Rust orange was used as a spot colour liberally to break up the generally flat black scheme. 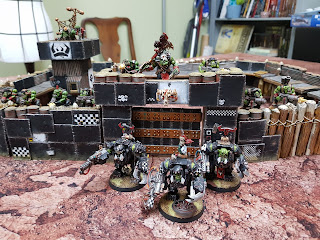 Overall, the kit is fantastic quality with very few of the imperfections you'd usually expect from resin scenery. It's also a good size and doesn't overly dominate the board. I plan on expanding my terrain collection to accompany this fort to include more scrap buildings. Perhaps I'll be further inspired by the base buildings in Dawn of War. Who knows?
Posted by Musings of a Smurf at 6:17 pm No comments:

Viridia does not look kindly on rowdy separatist upstarts. For this reason, Viridia maintains a number of quick reaction task forces on full alert with a brief to respond quickly to separatist threats. 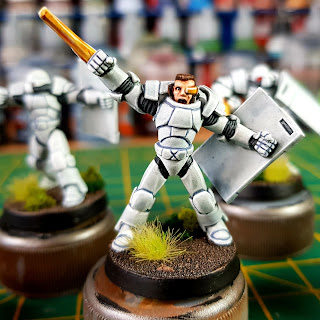 Considering the fun I've been having painting separatist forces, I thought it prudent to build a task force to fight them. Luckily, I have a reasonable collection of unpainted 'power armoured' marines from the 'Shock' and 'Assault' variety as well as a character and some support platforms.

I have begun with a small unit of shock marines. I wanted the paint scheme for all power armoured figures to reflect the original artwork of a Shock Marine that featured on the front of the purple rule book. As you can see this is a clean white with bluish tones. This gave me the idea to search for tutorials on painting White Scars Space Marines to give me guidance. 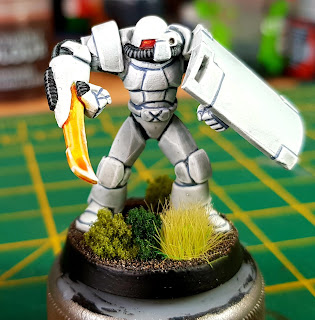 They were paint stripped first using acetone based nail varnish remover and based with Airfix bright white spray paint. I then followed this very handy guide by Juan Hidalgo using a combination of contrast paints and Vallejo game colours. I chose to use Iyanden yellow contrast paint for the vibro scythes, which I highlighted up with pale yellow and white.

Posted by Musings of a Smurf at 1:00 pm No comments: 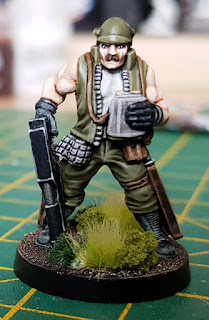 Initially, this marine isolation project was mainly an excuse to dust off some ancient models and get them up to scratch. However, I must admit that as I have now completed all of the marine units I own, I found myself enjoying the project so much that I wanted to continue. So, I treated myself to this Kurt Kwinsky miniature from Scotia Grendel to act as a Lieutenant character for the separatist forces.

I painted him up in exactly the same way as the other marines and I think he fits into character of the force very well. Game-wise, I shall be altering his stats slightly to give him a bit more impact on the table. I'll mainly be giving him a few more wounds and allowing him to join marines units rather than commando units. To reflect his new profile I've named him Lt Mick Krainer. I'm sure he'll lead the men admirably.

To keep up my momentum, I'm hoping to pick up another marine unit and another mounted chain gun team to round off the force.
Posted by Musings of a Smurf at 10:22 am No comments: